Indonesia Crowns As The Most Beautiful Country In The World, Beats New Zealand

by Admin Idnaround
in Indonesian News
0

Walking or traveling around enjoying the natural beauty in various parts of the world is the dream of many people.

Not a few who want to enjoy the panorama of the Alps in Switzerland, Lake Moraine in Canada, Patagonia National Park in Argentina, Cappadocia in Turkey to Raja Ampat in Indonesia.

But do you know which country is the most beautiful in the world?

Recently, British media, money.co.uk, released a list of countries with the most beautiful panoramas and natural conditions in the world.

In the report, they named Indonesia as the most beautiful country with the most and the best natural panorama.

The following is a list of the most beautiful countries in the world by money.co.uk: 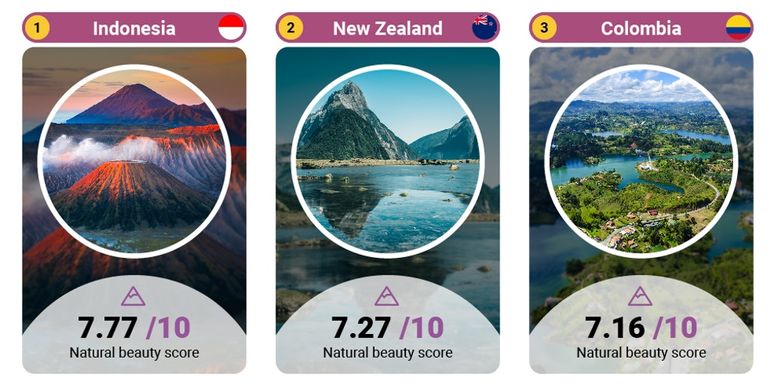 Indonesia is the most beautiful country because every 100,000 square kilometers of its territory there must be natural beauty such as mountains, volcanoes, coral reefs, tropical forests and glaciers.

The writer who is also the Personal Finance Editor Sal Haqqi said, this beautiful and beautiful natural wonder is definitely a big attraction for travelers from all over the world.

“Indonesia is the most beautiful country in the world, per 100,000 square kilometers the country has amazing natural beauty. Indonesia is home to more than 17,000 extraordinary islands and has 50,000 kilometers of coastline,” said Haqqi as quoted from money.co.uk, Sunday (February 13, 2022).

A number of popular tourist destinations that present natural beauty include Bali, tropical forests in Sumatra and Kalimantan including orangutan reserves, and a number of UNESCO world heritage sites such as Komodo National Park.

“And offshore in Indonesia all of them have beautiful coral reefs, full of life, most of which can be explored. The province of Bali is a popular tourist destination for tourists,” he said. The beauty of the Mandalika Circuit located in West Nusa Tenggara (NTB) has received praise from @MotoGP.

“What an incredible place! The Mandalika Circuit is firmly in the category of most beautiful circuits in the world.

Amazing place! The Mandalika Circuit is the most beautiful circuit in the world,” as quoted from the tweet, Sunday (February 13, 2022). This country has a natural panorama that is no less interesting, ranging from hills, mountains, including the Southern Alps and a number of active volcanoes.

In addition, the coastline in the country also stretches for more than 15,000 square kilometers.

With this super cool panorama, making the country the target of tourists from abroad.

In fact, a number of areas in New Zealand are often used as shooting locations, one of which is the film The Lord of the Rings. Colombia is in third place, the country with the best natural beauty in the world.

Just like the two most beautiful countries before, Colombia also has a fairly long coastline along the Caribbean Coast.

In addition, this country has a very varied landscape, from the Andes mountains to the Amazon jungle which is phenomenal because more than 500,000 square kilometers of the location is tropical forest.

In addition to these three countries, here is another list of the most beautiful countries in the world:

Here is Why Articles in RKUHP Draft is Considered as Dangerous!

Surya Darmadi Officially Becomes a Prisoner of AGO

S. Korea to Make Indonesia Production Base in ASEAN with IK-CEPA

S. Korea to Make Indonesia Production Base in ASEAN with IK-CEPA